Blank-check companies are getting their own exchange-traded fund.

Regulators recently greenlighted the launch of the Defiance NextGen SPAC Derived ETF, which is expected to start trading Thursday. The fund, which will debut under the ticker symbol SPAK, is looking to capitalize on the sudden boom in special-purpose acquisition vehicles, whose purpose is to acquire companies and bring them into the publicly traded stock market.

Blank-check companies, which are also known as SPACs, have become popular on Wall Street this year, facilitating mergers with buzzy companies such as sports-betting operator DraftKings Inc. So far this year, 115 blank-check companies have raised nearly $43 billion, according to data provider Dealogic. That is more than double the amount that SPACs raised last year and on par with all of the money those companies brought in between 2015 and 2019. 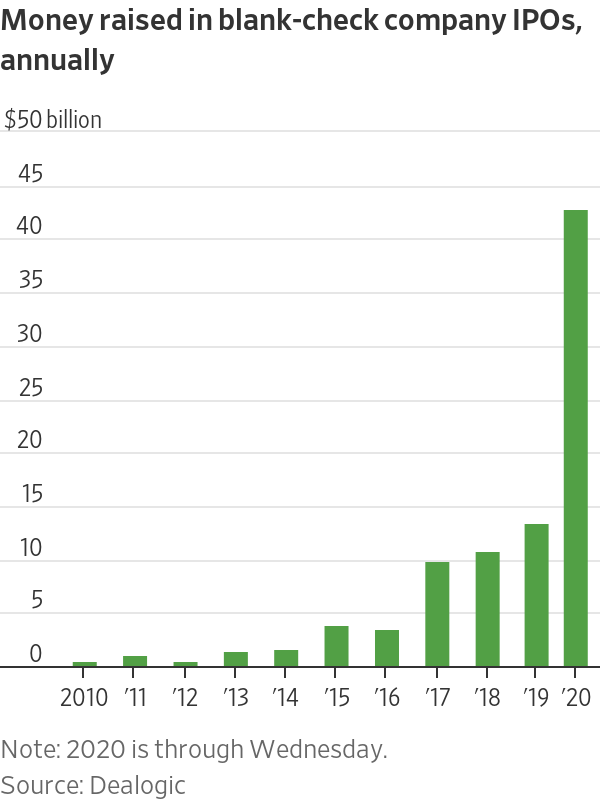 With dozens of blank-check companies prowling for an acquisition, ETF issuer Defiance ETFs LLC aims to take the guesswork out of the equation for investors by giving them a broad taste of those companies, said Matthew Bielski, the firm’s chief executive.

“SPACs can be very complicated for individual investors,” Mr. Bielski said, referring to instances where investors in blank-check companies get a combination of shares and warrants. “ETFs are the best way to get exposure to that.”

Defiance’s new ETF will allocate 80% of its weighting toward companies that have already gone public through SPACs, including DraftKings, whose shares have risen more than five times so far this year, and Virgin Galactic Holdings Inc., which is up 66%. The remaining 20% of the fund will go toward blank-check companies that continue to hunt for acquisitions, Mr. Bielski said.

Proponents of SPACs say they offer a simpler route to public markets than a traditional initial public offering. A SPAC transaction can be completed in a matter of months, compared with an IPO underwritten by banks that often takes longer and can leave companies exposed to market volatility, experts said.

But critics say companies that list through a SPAC receive less scrutiny than those that opt for the traditional IPO route, potentially leaving investors exposed to problems down the road. Electric-truck startup Nikola Corp. , for example, surged after going public through a SPAC deal, only to fall more than 70% over the past three months amid allegations of fraud.

Private companies are flooding into special-purpose acquisition companies, or SPACs, to bypass the traditional IPO process and gain a public listing. WSJ explains why some critics say investing in these so-called blank-check companies isn’t worth the risk.

The Defiance ETF aims to hedge its exposure to problematic SPACs by removing companies that fall under government investigation, such as Nikola, said Mr. Bielski. He said the fund carries a 0.45% management fee.

Defiance is launching the fund as its flagship ETF, the Defiance Next Gen Connectivity ETF, surpassed more than $500 million in assets since its early 2019 inception. Still, success isn’t guaranteed as many new ETFs fail to cross the $100 million mark within their first three years of existence, typically leading them to close.

Helping Defiance is the fact that it appears to be the first issuer to launch a dedicated SPAC ETF in the U.S. More could follow after a benchmark tracking blank-check companies, the IPOX SPAC Index, went live over the summer, giving other issuers something to hitch to funds.

SPAC IPO ETF in the pipeline