Could 2021 be “the year of the healthcare SPAC,” with the biotech, healthcare, and life sciences sector seeing activity explode around Special Purpose Acquisition Companies (SPACs), or “blank check” companies. The year has already seen the formation of over a dozen new SPACs focused on this sector, and several significant mergers including those of biotech unicorns 23andMe, Humacyte, Better Technologies, and Ambulnz.

The SPAC space in general is seeing an impressive amount of growth. In 2020, 237 SPACs raised around $83.4 billion1, but 2021 could outstrip that by a long way. In January and February 2021 alone, SPACs raised $68.5 billion2, with 66 floating in just the first 3 weeks of the year3. By early March, over 370 SPACs with more than $118 billion in capital were seeking targets4, while over 130 companies have gone public via a SPAC since the start of the year, reflecting startup appreciation for the SPAC route to public status5..

Biotech SPACs mirror this trend. 11 new healthcare SPACs launched in January 2021, compared with 36 in the whole of 20206. Nor is it just about the number of blank check companies in the biotech space; analysts have also noted that IPO valuations are rising and time to merger is shrinking, increasing the appeal of SPAC ETFs as a way of getting exposure to these developments7. 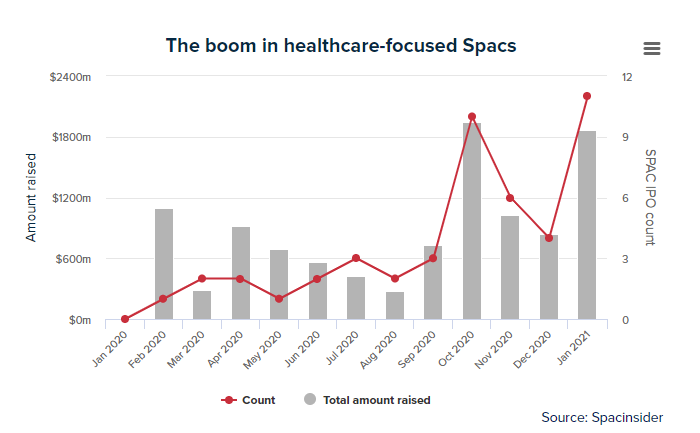 Biotech as a sector is buoyant, largely thanks to the pandemic. Many investors and analysts consider biotech and healthtech startups deserving of attention, as demand rises for digital health solutions like remote health monitoring, connected medical devices, and telehealth8. There’s also the need for new drugs and treatments that could be used to fight COVID-19 and slow the spread of Sars-COV-2.

Analysts also give credit to SPACs themselves for helping drive growth in biotech companies. When asked what’s fueling digital health exits, CB Insights senior intelligence analyst Marissa Schlueter replied “One word: SPACs. Quarter-to-date, as of Feb. 25, we’ve seen seven digital health SPACs. For context, that’s more than double the number seen in the fourth quarter of 2020 and equal to the amount seen in all of 2020. Before 2020, digital health SPACs were rare.9”

The traditional IPO model of a roadshow and closed-door valuation has been steadily losing its appeal. Both entrepreneurs and investors demand more transparency around valuation, and investing in SPACs can deliver. With a SPAC, a sponsor sells a number of shares, typically at around $10 per share, to form a publicly-traded shell company with no operations of its own. It exists solely to find and merge with another private company. SPAC shareholders get to vote on the proposed merger, and they can sell their shares (and their vote) as they wish, thereby democratizing the process.

Additionally, exiting through a SPAC is significantly faster and smoother for startups than a traditional IPO, which holds a lot of advantages for business founders. Successful startups in the biotech and healthtech space are highly motivated by speed at the moment. They see that demand is high for biotech solutions, and they want to move fast to seize the opportunity before it dissolves. SPACs enable them to secure a deal within just a few months of negotiations, as opposed to the year or more it usually takes for a traditional IPO10.

So far in 2021, there are 53 SPACs to invest in that have declared an interest in healthcare and life sciences and are searching for targets, but that number is likely to grow11. February saw the IPO of Foresite Capital’s second SPAC, raising $175 million, and Frontier Acquisition filed a SPAC, aiming to raise $200 million12. Foresite Acquisition has a promising track record; the first Foresite Acquisition SPAC, FS Development, which IPOed in August 2020, merged with Gemini Therapeutics in March 2021 in one of the fastest mergers to date. The deal was valued at $216 million and is estimated to have raised the SPAC’s share price by 26%13.

In March, the European Biotech Acquisition SPAC IPOed at $120 million14; Blueprint Health filed the blank check company Blueprint Health Merger, aiming to raise up to $200 million15; and Israel’s Clal Biotechnology Industries (CBI) announced the formation of its own SPAC for the pharmaceutical or pharma-related digital health sector. Clal Biotech aims to raise $100 million, and to invest in an Israel-based private company valued at $500 million to $1 billion16.

2021 has already seen the formation of so many biotech SPACs that some analysts are speculating that the market could be flooded, affecting SPAC stock. David Kostin, head of U.S. equity strategy at Goldman Sachs, commented that “the blistering pace of issuance is likely unsustainable.” Some are expressing concern that with so much competition for targets and a deadline of 24 months to announce a merger, SPACs could be forced to complete lower-quality deals17.

Clal Biotech CEO Ofer Gonen addressed this issue, noting that unlike some SPAC sponsors, he and his colleagues know the Israeli biotech startup scene very well. Gonen indicated that he already had around 10 possibilities in mind.

As things stand, analyst pessimism around the high number of biotech SPACs to invest in may be unwarranted. A number of late-stage biotech unicorn startups have chosen to exit through a SPAC rather than the traditional route, and it seems likely that blank check companies will continue to be a popular path for top startups. One of 2021’s notable mergers was that of personal genetic testing company 23andMe with SPAC VG Acquisition Corp., founded by billionaire Sir Richard Branson. The deal is valued at $3.5 billion, including up to $759 million of gross proceeds from the VG Acquisition Corp., and $250 million of private investment in public equity (PIPE) of common stock, priced at $10 per share. Other investors include Fidelity Management & Research Company LLC, Altimeter Capital, Casdin Capital and Foresite Capital. 23andMe offers home DNA testing kits to help customers understand their ancestry and discover inherited traits to support more personalized healthcare. The company is pivoting away from genealogical insights and towards healthcare, with a partnership with GlaxoSmithKline to collaborate on drug development. and a broad self-directed pipeline of over 30 potential treatments18.

Another new SPAC acquisition concerns Better Therapeutics, which just announced that it will be going public through Mountain Crest Acquisition Corp. II, the second Mountain Crest SPAC, led by Suying Liu, Ph.D., former head of corporate strategy at Hudson Capital and chief strategist of Mansion Capital, along with Dong Liu, chief financial officer of Dongguan Zhishang Photoelectric Technology19. It’s expected that the deal will provide up to $113 million, including follow-up PIPE investment of around $56 million from Farallon Capital Management, RS Investments, Sectoral Asset Management, Monashee Investment Management and other undisclosed investors. Better intends to use the capital to fund ongoing clinical trials of its app-based treatments for Type 2 diabetes, and plans to develop more prescription apps for people with diabetes, high blood pressure, and other chronic illnesses. Better has a strong outlook, with an addressable market of around 34 million Americans who have been diagnosed with type 2 diabetes and another 88 million who are pre-diabetic. An interesting feature behind this SPAC deal is the fact that Mountain Crest isn’t a dedicated biotech SPAC. The first Mountain Crest SPAC, which went public in June 2020, bought the company behind the Playboy brand20. It shows that biotech deal opportunities are strong enough at the moment to attract SPACs that weren’t specifically committed to the sector.

Other notable biotech SPAC mergers include that of Humacyte with Alpha Healthcare Acquisition Corp., and Ambulnz with Motion Acquisition Corp. Humacyte’s exit is valued at $275 million, including $100 million from the SPAC and $175 million from PIPE investment. Humacyte is developing regenerative human tissues that can be easily implanted into any patient, and previously sold a 19% stake to Fresenius Medical Care for $150 million in 2018. Humacyte is also in talks with the Department of Defense regarding use of Humacyte’s solution in battlefield trauma care. Humacyte’s CEO, Laura Niklason, said they chose to use a SPAC because the process gives the company more time to explain its differentiated offering than a traditional 45-minute roadshow pitch21.

Ambulnz provides two complementary services that mesh the medical transportation and last-mile health service niches. The company delivers home-based, non-critical medical care such as vaccinations, bloodwork, wound care, EKGs, and testing, as well as a medical mobility service that can transfer any patient to the appropriate location. Ambulnz will be renamed DocGo after the deal, which is valued at $1.1 billion, including $125 million of private investment led by Light Street Capital with participation by Moore Strategic Ventures, an existing stockholder of DocGo. DocGo is predicted to generate over $155 million in revenue in 2021, and more than $265 million for 2022. DocGo’s CEO Stan Vashovsky says that the company has tremendous growth potential and a total addressable market of $95 billion. DocGo plans to use the capital to rapidly expand its sphere of activity to build a predictable recurring revenue base of approximately 70% of forecasted revenue for 202122.

Between the ease and transparency of blank check companies for startup exits, and the ongoing demand for digital health solutions, new treatments, and innovative drugs, there’s a lot to take in for those considering investing in SPACs in the biotech sector.

2 “SPACs are becoming less of a sure thing as the deals get stranger, shares roll over” March 4, 2021, CNBC https://www.cnbc.com/2021/03/04/spacs-are-becoming-less-of-a-sure-thing-as-the-deals-get-stranger-shares-roll-over.html

4 “SPACs are becoming less of a sure thing as the deals get stranger, shares roll over” March 4, 2021, CNBC https://www.cnbc.com/2021/03/04/spacs-are-becoming-less-of-a-sure-thing-as-the-deals-get-stranger-shares-roll-over.html

8 “Why 2021 could be the year of healthcare SPAC deals and the unicorns ripe to go public” March 10, 2021 https://www.fiercehealthcare.com/tech/why-2021-could-be-year-healthcare-spac-deals-and-unicorns-ripe-to-go-public

9 “Why 2021 could be the year of healthcare SPAC deals and the unicorns ripe to go public” March 10, 2021 https://www.fiercehealthcare.com/tech/why-2021-could-be-year-healthcare-spac-deals-and-unicorns-ripe-to-go-public

11 “Why 2021 could be the year of healthcare SPAC deals and the unicorns ripe to go public” March 10, 2021 https://www.fiercehealthcare.com/tech/why-2021-could-be-year-healthcare-spac-deals-and-unicorns-ripe-to-go-public

17 “SPACs are becoming less of a sure thing as the deals get stranger, shares roll over” March 4, 2021, CNBC https://www.cnbc.com/2021/03/04/spacs-are-becoming-less-of-a-sure-thing-as-the-deals-get-stranger-shares-roll-over.html

Could SPACs rescue the cannabis industry?